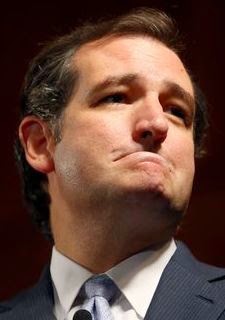 Senator Ted Cruz, the Republican presidential candidate, has positioned himself as a strong opponent to same-sex marriage, urging pastors nationwide to preach in support of marriage as an institution between a man and a woman, which he said was “ordained by God.” But on Wednesday night, at a reception for him at the Manhattan apartment of two prominent gay hoteliers, the Texas senator struck quite a different tone. During the gathering, according to two attendees, Mr. Cruz said he would have no problem if one of his daughters was gay. He did not mention his opposition to same-sex marriage, saying only that marriage is an issue that should be left to the states. The dinner and “fireside chat” for about a dozen people with Mr. Cruz and his wife, Heidi, was at the Central Park South penthouse of Mati Weiderpass and Ian Reisner, longtime business partners who were once a couple and who have been pioneers in the gay hospitality industry. “Ted Cruz said, ‘If one of my daughters was gay, I would love them just as much,’” recalled Mr. Reisner, a same-sex marriage proponent who described himself as simply an attendee at Mr. Weiderpass’s event.

Reisner is the owner the Out NYC hotel and nightclub complex near Times Square and earlier this year he bought the majority of the commercial district in Fire Island Pines. In October 2014 the 25 year-old manager of a Hell’s Kitchen gay bar was found dead of a reported drug overdose in a bathtub at Reisner’s $25M penthouse, the site of last night’s meeting with Ted Cruz. According to the above-linked report, Cruz bragged at the meeting about being friends with homocon billionaire Peter Thiel.

NOTE: There are conflicting reports at whether the event with Cruz was a fundraiser.  CNN is saying that it was, but the New York Times is saying this “Mr. Cruz was on a fund-raising tour of New York City, although the dinner was not a fund-raiser.”