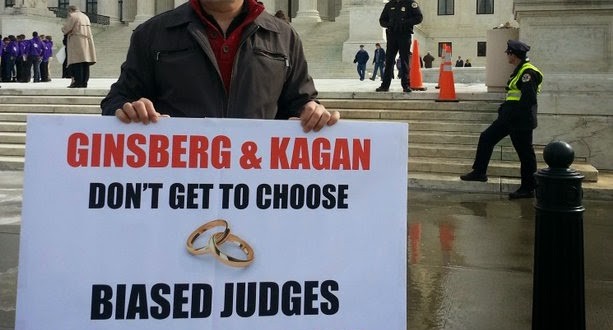 Constitutional Attorney and former Massachusetts Gubernatorial Candidate Dr. Scott Lively, in his capacity as President of Abiding Truth Ministries and it’s global subsidiary Defend the Family International, will reiterate his call for the immediate recusal of Supreme Court Justices Ruth Bader Ginsberg and Elena Kagan at a press conference on the steps of the Supreme Court in Washington DC on Monday, April 27th at 10:00am. Lively is one of fifteen national pro-family leaders who have organized the “Restrain the Judges” Project, calling on the Congress of the United States to exercise its power under Article 3, Section 2 of the U.S. Constitution to remove jurisdiction over marriage from the Supreme Court. The members of this coalition will present as many as 2 million “Restraining Orders” to the Supreme Court at the press conference. These are letters from pro-family advocates across the nation personalized to all 535 Members of the Congress and the 9 Justices of the Supreme Court.

“As many as two million.” Heh. The petitions are being coordinated by ReaganBook nutjob Janet Porter and Lively swears that nobody is profiting from the $50 per petition cost.

If this court declares homosexual sodomy to be a basis for marriage by judicial fiat and the majority ruling relies on the blatantly pre-judiced (pre-judged) votes of Gingberg and/or Kagan, this nation will be thrown into a state of civil and moral chaos not seen since the civil war.  A sizable portion of our citizenry, and numerous state governments will rightly refuse to comply with the ruling of the court and civil disobedience will be the only recourse for people of strong Biblical faith.