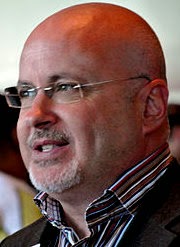 “I know there are Republican members of the LGBT community. And there are Republican legislators who support equality, albeit not many. Fine, go ahead and throw them a fundraiser they will remember for a long time. But let’s not support those who believe we’ll burn in hell because of who we are and who we love. Does a candidate for any office support your existence as a human being? Do they support your quest for full marriage equality? Would they make sure you couldn’t be fired from your job merely for being gay or lesbian? Will they help protect our LGBT youth with strong bullying protections? You get the idea. Please add those and other issues to the list of questions you ask BEFORE you invite a candidate over, introduce your friends, raise money for them or post pictures on the internet smiling with them — because apparently some people will use anyone to get ahead, even if they completely disagree with you as a person.” – Rep. Mark Pocan, writing for the Huffington Post.

NOTE: The owners of the NYC’s Out Hotel have denied that the event with Sen. Ted Cruz was a fundraiser. The boycott page on Facebook now has over 10,000 members.