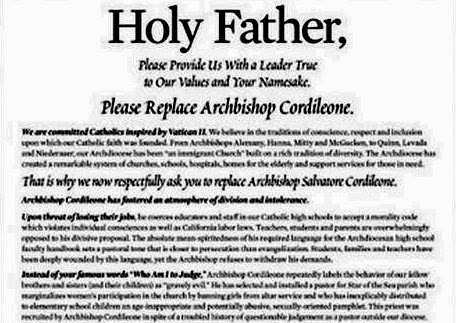 Via the San Francisco Chronicle:

In an unprecedented move, more than 100 prominent Roman Catholic donors and church members signed a full-page ad running Thursday in The Chronicle that calls on Pope Francis to replace San Francisco Archbishop Salvatore Cordileone for fostering “an atmosphere of division and intolerance.” The plea follows months of dissent within the archdiocese over Cordileone’s emphasis on traditional, conservative church doctrine — including asking high school teachers and staffers at Catholic schools to sign a morality clause that characterizes sex outside of marriage and homosexual relations as “gravely evil.”

In their open letter to the pope, Cordileone’s critics say his morality-clause push is mean-spirited and “sets a pastoral tone that is closer to persecution than evangelization.” The ad drew swift condemnation from the archdiocese, which said those who signed it don’t speak for San Francisco’s Catholic community.

Cordileone is considered by some to be the “father of Prop 8” and he will again attend NOM’s upcoming hate march at the Supreme Court. Hit the link for much more about the petition.