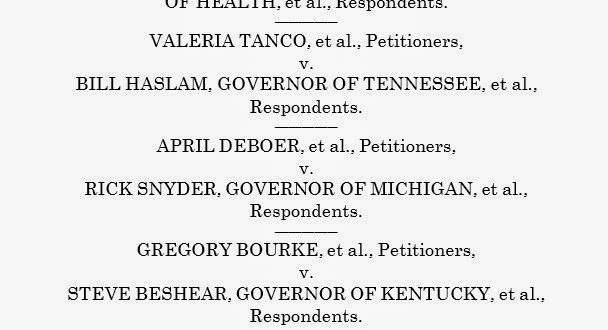 Only 57 of the 299 sitting GOP members of Congress have signed onto an amicus brief to the Supreme Court which predictably argues that states should have the final say on same-sex marriage. An excerpt:

The petitioners’ view that every State must recognize the validity of a same-sex marriage celebrated in another State would violate fundamental principles of federalism. It would allow partners to evade the restrictions of the forum State simply by eloping to a neighboring State that lacks the same restrictions. This rule would permit each State, in effect, to project its marriage policy into all neighboring States, forcing uniformity instead of permitting federal diversity. In sum, the States’ traditional sovereignty over marriage and domestic relations plainly encompasses the authority of a State to refuse to recognize the validity of marriages that were validly enacted in other jurisdictions. This rule is “as old as the Republic.”

Pretty much all of the names you’d expect are on the brief, including Ted Cruz, Louie Gohmert, Pete Sessions, Mitch McConnell, James Inhofe, Randy Forbes, John Fleming, Randy Weber, Virginia Foxx, Vicki Hartzler, Steve King, and Tim Huelskamp. But the bigger story here is that 242 GOP members of the House and Senate did NOT sign this brief to the Supreme Court. And that is how we should spin this.