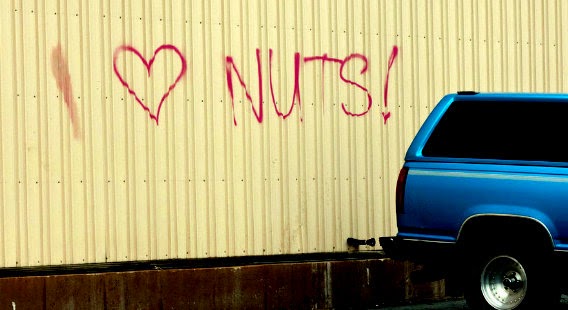 Already targeted by an egg-thrower and protestors, a Grandville auto shop came under fire from a can of spray paint days after its outspoken owner created a controversy with his anti-gay Facebook posts. Graffiti was sprayed on the Dieseltec building overnight. The message: “I (heart sign) NUTS.” Dieseltec owner Brian Klawiter last week created headlines and set off a social-media firestorm when announced on Facebook he would refuse to provide service to openly gay customers. The stance led to a protest Saturday outside of his business at 2875 Ottawa Ave. SW. Grandville Police Chief Dan Steere on Monday said he had no intention of stationing a police officer at the place, but said police would keep an eye on the area with additional patrols.

Klawiter has posted more photos on his Facebook page. The photos include a window apparently broken by a rock and the message “Bash Back” written on the windshield of a truck.  He writes:

Well, folks, as we predicted, it didn’t take long for the ugly face of the homosexual movement to present itself. What started out with “mere” death threats against myself and my family and homosexuals spamming my Facebook page with gay porn shots, has escalated to physical violence. See the pics below. We called police to file a report this morning, and City of Grandville Officer John Davis responded. The officer arrived, looked around, took a few notes, chuckled, and said “turn it in to the insurance company.” He gave us a Police Report number 15-2779, but did not take the rock which has a fingerprint on it. The homosexual agenda is evil, and is prepared to destroy anyone who gets in its way, or who calls homosexuality a sin. Today it’s us; tomorrow, it could be you.

At this point there’s no way to know who damaged the shop or if it was an inside job meant to further inflame anti-gay sentiment. But it should go without saying that our people should not be doing things like this.

RELATED: In 2009 a Michigan-based gay anarchist group calling themselves Bash Back was sued in federal court by the Alliance Defending Freedom after they invaded a local church, pulled the fire alarm, and threw leaflets at parishioners. At that time I wrote: “It was a dumbass, pointless, unfocused action directed at hapless nobodies. Nothing but a black eye for our movement.”