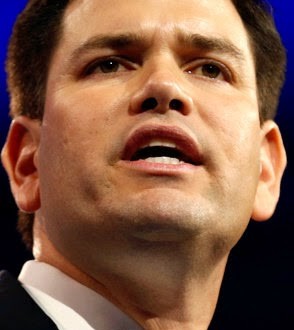 Marco Rubio: It’s Ridiculous To Think Gays Have A Constitutional Right To Marriage

“There is no federal constitutional right to same sex-marriage. It doesn’t exist. There is no federal constitutional right to same sex-marriage. There isn’t such a right. You would have to really have a ridiculous and absurd reading of the U.S. constitution to reach the conclusion that people have a right to marry someone of the same sex. There is no such constitutional right. Can a state decide to change their laws? Yes, but only through the political process, not through the court system and that’s what is happening now. The advocates of same-sex marriage refuse to go to the legislatures because they can’t win that debate, they don’t want to have a debate in society. They want courts to impose it on people and they are not even satisfied with that. They have now gone further. They want to stigmatize, they want to ostracize anyone who disagrees with them as haters. It’s very simple. This is not a policy against anyone. I believe, as do a significant percentage of Americans, that the institution of marriage, an institution that existed before government, that has existed before laws, that institution should remain in our laws recognized as the union of one man and one woman.” – Sen. Marco Rubio, speaking to the Christian Broadcasting Network.