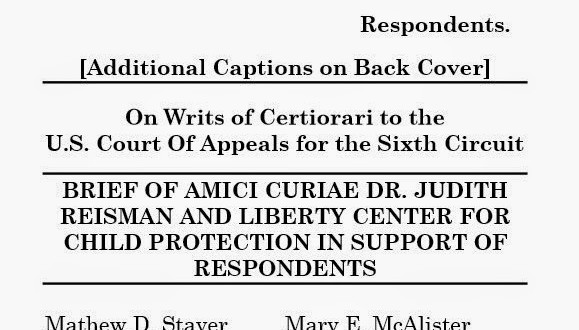 The Liberty Counsel today filed an amicus brief to the Supreme Court, arguing that same-sex marriage must not be legalized nationwide because homosexuality should still be criminalized in the first place. An excerpt:

Nearly seven decades of Kinseyan cultural transformation have shown that Kinsey’s promises of a freer, more enlightened and safer society were, at best, illusory, and at worst, deceptive. All of the cultural indicators that should have improved according to Kinsey and his supporters have in fact declined, in some cases, precipitously, as the full effect of the called-for changes has become manifest. Kinsey claimed that fornication and adultery were widespread and not harmful. If anything, according to Kinsey, such experiences actually strengthened marriages. Therefore, laws against fornication and adultery were unjust, unfair and unconstitutional. Drafters of the MPC [Moral Penal Code] took Kinsey’s advice and decriminalized those sexual offenses. Instead of strengthening marriages, the decriminalization and destigmatization of adultery, fornication and other non-marital conduct have had the opposite effect.

According to the Liberty Counsel, the decriminalization of “non-marital conduct” is responsible for increases in rape and illegitimate babies. So stop them gays from getting married.

UPDATE: I forgot to mention this bit from their press release: “Liberty Counsel is calling Christians to unite in fasting and prayer for
three days before Supreme Court hears the case on April 23, 24, and
25.”

NOTE: The anti-gay briefs are pouring in and I’ll be excerpting more of them over the weekend. Hang onto your hats.