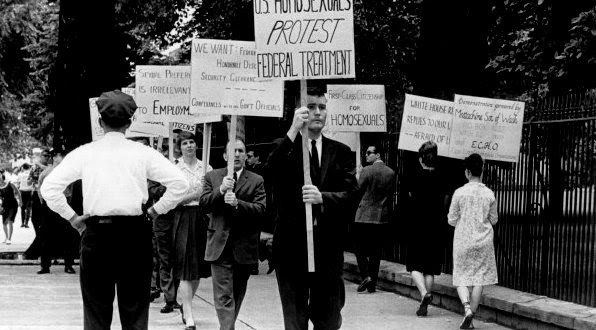 “It was so revolutionary. It had never been done before anywhere in the world. We all wore coat and ties and we all had pseudonyms. I wasn’t scared. I was intrigued by the idea. But I was intimidated by all the photographers. I was only 23. And as they came across the street they started photographing us. Every time I approached the cameras, I hid behind my sign because I was unnerved by the whole thing. But I don’t think I was scared. I was very open and proud of being gay. People passed by in disbelief. It was written on their faces. It had never had happened before. My sign read, ’15 million homosexuals protest federal treatment.’ It reflected what I thought. We could not conceive then the astonishing progress we would eventually
make as a community. The idea that gay people, gay men and women, could
work openly in the government and serve in the military. It was beyond
our imagination.” – Paul Kuntzler, 73, speaking to ABC News about picketing the White House fifty years ago today on April 17th, 1965. That protest, which included future LGBT rights giants Barbara Gittings and Frank Kameny, is believed to have been the first organized gay rights demonstration in American history.