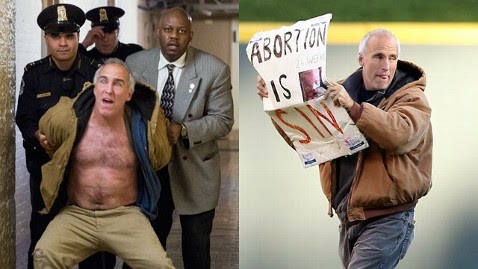 Today’s Supreme Court hearing was momentarily disrupted by a man in the gallery who repeatedly screamed “homosexuality is an abomination” before being carted out by federal police. It turns out that the man is a well-known crackpot named Rives Miller Grogan, seen above in October 2011 when he ran on the field during a National League playoff game between the Cincinnati Reds and the San Francisco Giants.

In 2012 Grogan was arrested by DC police after he climbed a tree during Obama’s second inauguration to scream anti-Obama slogans. Grogan has disrupted many events around the nation and has been ejected from the US House and Senate galleries for screaming. In 2013 a DC district judge permanently banned Grogan from the city, spawning a freedom of speech debate.

“Banning him from the District because he’s sitting in a tree or speaking out, I think is absurd,” said John Whitehead, president of the Rutherford Institute, a civil-liberties group that is taking up Grogan’s case. “He’s strange, but do you know how many strange people enter D.C. every day who probably shouldn’t be here?” Magistrate Judge Karen Howze signed the order Tuesday, telling Grogan to stay out of the city until a hearing Feb. 25. The order is more sweeping than what prosecutors had sought. The U.S. Attorney’s Office had asked that Grogan be banned from the Capitol grounds, House and Senate office buildings, the Library of Congress and the U.S. Supreme Court. But Howze broadened the request as a condition of releasing Grogan from jail until his trial.

Grogan, 47, who calls himself “Pastor Rick” and runs a ministry and boardinghouse in Los Angeles, admits he’s an irritant, racking up about 10 arrests and a half-dozen convictions in two years in House and Senate buildings alone. He said he patiently waits for the proceedings to be recessed before he stands and shouts, most recently in the Senate gallery when he screamed that legal abortions caused the massacre in Newtown, Conn. “I preach, and I preach loudly on Capitol Hill,” said Grogan, who said he’s never spent more than a few days in jail. He’s been thrown out of a presidential debate, a Major League Baseball game attended by Mitt Romney, and too many buildings to count.

Maybe now the Supreme Court will uphold that ban from DC.