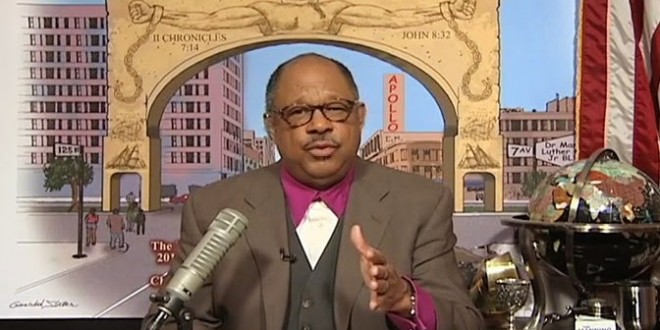 Harlem Hate Pastor: Christians Must Be Willing To Kill To Stop Sodomites

“If we’re going to win this battle for the lord God almighty, two things are going to have to happen in terms of our battle strategies. We’ve got to be willing to die for what we believe. If you believe the word of God, then there is no way you will not die willingly for the cause of Christ. But the other thing – if we’re gonna win this battle against Obama, the long-leggy mack daddy, the quasi-Muslim freak, the vice president of both death and hell, against the sodomites, against racism – we’re gonna have to be willing to kill as well. You can try to arrest me, saying that I’m inciting murderous behavior. Go ahead and try. See if that will stand up in court.  Let me tell you something, if you’re not willing to kill for what you believe, if you’re not will to kill those that are diametrically opposed in great evil against you believe, then you’re not worthy of his service. You gotta be willing to kill. You gotta be willing to die.” – Harlem Pastor James David Manning, in a YouTube clip published today.

Previous Robert Oscar Lopez: Christians Will Lose All Rights If SCOTUS Approves Marriage
Next Who Is Fancy – Goodbye