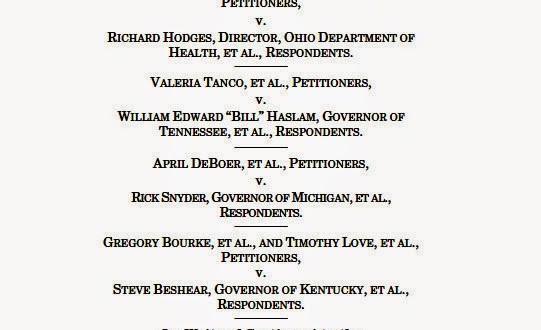 Foundation For Moral Law To SCOTUS: Say No To Same-Sex Marriage Because The Bible Says To Kill Homosexuals

The Foundation For Moral Law, which was founded by Alabama Supreme Court Chief Justice Roy Moore, has filed a Supreme Court amicus brief which declares, among other reasons, that the bible says homosexuals must be put to death and therefore same-sex marriage must be stopped. An excerpt:

The law of the Old Testament enforced this distinction between the sexes by stating that “if a man lies with a male as he lies with a woman, both of them have committed an abomination.” Leviticus 20:13 (KJV). At creation, therefore, the sexes were established as “male and female” and “[f]or this reason,” marriage was defined at its inception as a union between a man and his wife. Genesis 2:18-25. Only the male-female marriage is inherent in the same created order that gives us our legal equality before the law, as recognized in the Declaration of Independence. The Bible has been considered the authoritative source of morality and worldview for Western civilizations for nearly two millennia (three millennia for the Tanakh or Old Testament), including the time period in which the institutions of American law and government were established. The concept of being “created equal” cannot be properly understood without a recognition of “the laws of nature and of nature’s God” upon which the concept of equality depends.

Note that they leave off the “they shall surely be put to death” portion of that Leviticus quote. The brief goes on to cite the British death penalty for sodomy under laws adopted in 1533 during the reign of Henry VIII. The FML brief also gleefully cites the infamous Paul Cameron study which declared that gay men have shortened lifespans. Cameron’s result came by averaging the ages of men listed in AIDS obituaries, which is like averaging the ages of children killed in car accidents and concluding that the average American child dies by the third grade.

The Foundation For Moral Law has been headed by Roy Moore’s wife, Kayla Moore, since he returned to the Alabama Supreme Court. Serial arrestee Caleb Moore, their son, is also an employee. See the full brief at Equality Case Files.

Previous Barney Frank To Atheist Politicians: Stay In The Closet About Your Atheism
Next NORTH DAKOTA: Gov. Jack Dalrymple Orders State Agencies Not To Discriminate