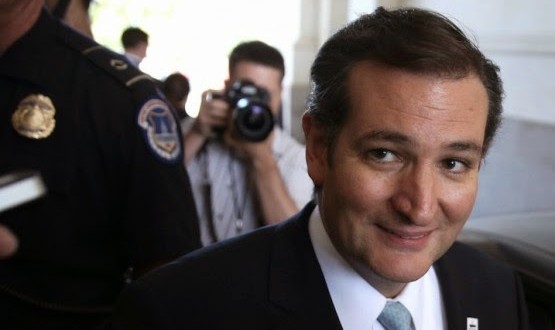 Bloomberg gives us some interesting history:

[Ted] Cruz is making the gay marriage debate the cornerstone of a bid to rally conservatives to his 2016 presidential bid, but same-sex issues haven’t always been the top priority for a lawmaker who built his profile as a limited-government, Tea Party-aligned conservative. As Texas solicitor general when the Lawrence v. Texas case came before the Supreme Court, Cruz was “very much in the middle of all this drama,” said Mitchell Katine, who was local counsel to the two gay men at the center of the case, John Lawrence and Tyron Garner. The two had been dragged out of their bedroom by police and charged with “deviate sex.”

Yet “Cruz remained absolutely silent,” Katine said. The case remained assigned instead to a Harris County district attorney. Through a spokesman, Cruz said he didn’t step in because the case was criminal in nature and his office primarily handled civil cases. Yet six of the nine cases Cruz argued before the nation’s highest court were criminal in nature. Cruz also was just beginning a new job, and his advisers say he wasn’t in a position to take over. Cruz started the solicitor general’s job Feb. 10, 2003 and the Texas brief was filed on Feb. 17. Yet Dellinger notes that the court argument wasn’t until March 26, which gave “plenty of time to prepare.” “One would expect the state solicitor to argue a case of this magnitude,” said Dellinger.

The above-linked article goes on to recount the times that Cruz has courted major homocon donors including billionaire PayPal founder and GOProud supporter Peter Thiel, who contributed nearly a million dollars to Cruz campaigns. This history is rather interesting in light of the still-raging controversy about those gay hoteliers.