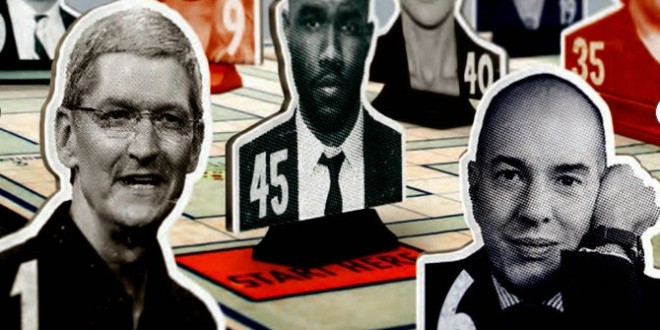 Out Magazine today published its ninth annual ranking of the 50 most powerful LGBT people in the United States.  Taking the top spot from last year’s list leader, Ellen DeGeneres, is Apple CEO Tim Cook, who formally came out six months ago. Here is this year’s top ten:

Romero is the executive director of the ACLU and Henry is the head of the SEIU. Missing from the list for the second year is closeted homocon blogger Matt Drudge, who ranked at #21 in 2013 and at #16 in 2012. Fellow homocons Peter Thiel and Ken Mehlman appear on this year’s ranking at #13 and #41 respectively, with closeted Fox anchor Shepard Smith coming at #20. Also gone this year is recently retired blogger Andrew Sullivan, who ranked at #26 last year. Hit the top link for the full 2015 list.