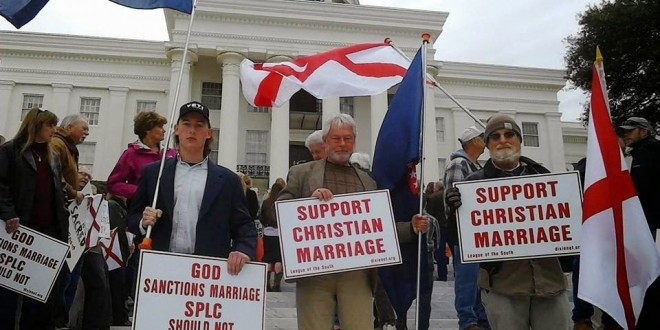 Back in February white supremacists from the League Of The South distributed signs like the ones seen above at the anti-gay marriage rally held on the steps of Alabama Capitol Building, where supporters cheered Roy Moore. Yesterday the League Of The South celebrated the 150th anniversary of the assassination of President Abraham Lincoln. From their president Michael Hill:

One hundred and fifty years ago today, Abraham Lincoln died at the hands of John Wilkes Booth. As Booth pulled the trigger in Ford’s Theatre, he is said to have shouted: “Sic semper tyrannis!” (Thus always to tyrants). Many, including some Southerners, believe that Lincoln, had he lived, would have been lenient to the South during Reconstruction. The truth of the matter is that we will never know. But we do know this: Lincoln refused to allow the Southern States to leave the voluntary union of their Fathers and provoked a war against them that killed hundreds of thousands and left the South devastated for decades to come. He also destroyed the political order created by the Founders and set the stage for the all-encompassing Leviathan State under which all Americans (except the favored classes) suffer today. Sic semper tyrannis, indeed! I will raise a glass today in celebration of the death of all tyrants, including Abe Lincoln, who have afflicted my people over the ages. And as you’re out and about across the South today, be on the lookout for signs–subtle and not-so-subtle–of our celebratory mood. May God save the South!

Right Wing Watch reported recently that Roy Moore’s successful return to the Alabama Supreme Court was bankrolled by Michael Peroutka, a former leader of the League of the South. In December 2014 Peroutka was elected to the county council of Anne Arundel County, Maryland. The League Of The South is an SPLC-certified racist hate group.

RELATED: Michael Hill and other League Of The South members participated in the comments thread of my February post about the anti-gay marriage rally in Alabama.

Previous ILLINOIS: Donor To Schock Campaign Will Sue To Get His Money Back
Next Aaron Hernandez Found Guilty