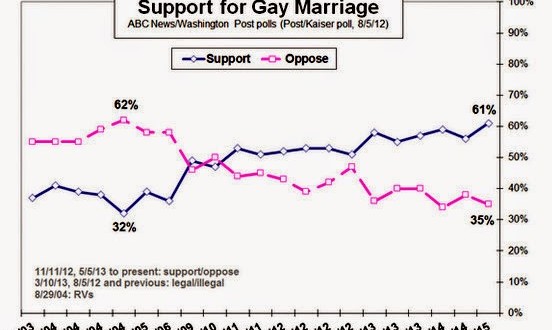 A record-high 6 in 10 Americans support same-sex marriage and a similar share say individual states should not be allowed to define marriage as only between a man and a woman, according to a new Washington Post-ABC News poll. The national debate on same-sex marriage moves to center stage next week, when the Supreme Court hears oral arguments on whether state restrictions on same-sex marriage are unconstitutional. The Post-ABC poll finds 61 percent of Americans support allowing gays to marry and 35 percent are opposed. Support is up only slightly from last year but is a reversal from public sentiment a decade ago, when opponents outnumbered supporters 58 percent to 39 percent. In the short and long run, support for same-sex marriage has grown significantly across demographic and political groups. Among those under age 30, support has grown since 2005 from 57 percent to 78 percent. Among those 65 and over, it has increased from 18 percent to 46 percent. Support has also risen by double digits across partisan groups, though Democrats and independents have shifted the most.