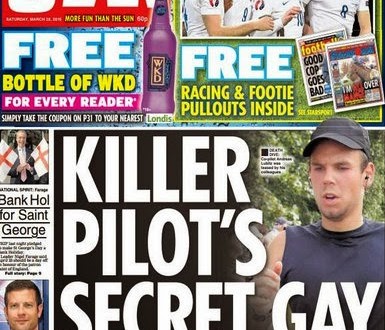 You Knew This Was Coming

British and German tabloids are claiming that the Germanwings pilot was “tormented” about being gay. From Britain’s Daily Star, which has more than twice the circulation of the Guardian:

Lubitz’ relationship with his girlfriend is said to have broken down and it has been claimed that he was secretly homosexual. He was even taunted by pilot pals for previously being a “trolley dolly” airline steward and dubbed Tomato Andy – a derogatory gay slur. It also emerged the David Guetta fan enjoyed partying at a German nightclub which holds boozy, circus-themed events involving drag queens and dwarves. The lively Agostea club in Koblenz lies 20 minutes from the home he shared with his parents in the German town of Montabaur. The revelations came as German airline Lufthansa, which owns Germanwings, announced it would pay up to e50,000 “immediate financial assistance” to relatives of every victim of the horror crash.

From The Mirror tabloid:

Former colleagues told how Lubitz was mercilessly taunted over his cabin crew past. He was nicknamed “Tomato Andy” because they believed he didn’t know if he was a “fruit or veg” – a reference to his sexuality. One ex-workmate said it was slang term for a “straight who was really gay”. Another added: “Everyone thought it strange that he kept on going back home to his mum and dad at weekends. “He had a nice car, a good job, and good prospects, but he seemed to spend all his time by himself.” Lubitz bought two top-of-the-range Audi cars earlier this month. One was said to be a present for himself and the other for his girlfriend. Habibalah Hassani, 53, who runs a pizza restaurant near the killer pilot’s Dusseldorf home, said he had often seen him with his lover. But neighbours in Montabaur claimed she had not been seen there recently.

Rumors about the pilot’s sexuality have even been picked up by the reputable Independent:

Mass-murdering Germanwings co-pilot Andreas Lubitz had had a “serious relationship crisis” with his girlfriend, investigators told Germany’s Bild newspaper yesterday, and according to one report last night he split with her the day before the crash. An ex-girlfriend told Bild that Lubitz had once told her he wanted his name remembered and that he planned to go down in history by doing something to “change the whole system”. “People all over the world will know my name.” Other theories concerned his sexuality. There was speculation yesterday that he may have been gay and felt forced to keep it secret, after it emerged that a male friend had sent a message to Lubitz’s personal website after the crash. It read: “We were only talking yesterday about what we would do together when you came back. You always made me smile.” It was suggested to The Independent that “Tomato Andi” was a joke gay term used to describe someone who repressed their homosexuality, a tomato being commonly referred to as a vegetable despite being a fruit. In any case, it now seems certain that Lubitz had serious psychological problems which he kept secret.

Meanwhile American crackpots like Pam Geller and Jim Hoft are predictably claiming that the pilot was a recent convert to Islam.