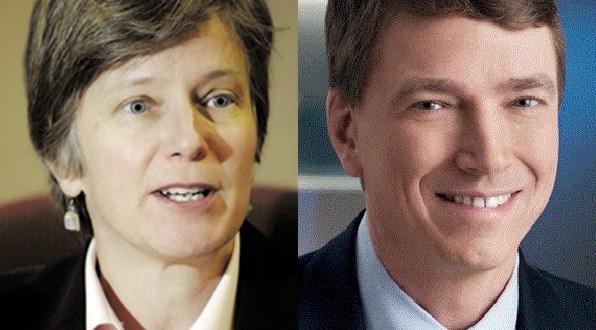 Who Will Argue At SCOTUS?

The good guys from all four states headed for SCOTUS gathered in Michigan this weekend where they participated in a mock courtroom hearing to work out who will make oral arguments in the two issues before the court. We might get their decision today. Via Reuters:

Intense negotiations peaked in Ann Arbor, Michigan, on Sunday when contenders involved met for the legal equivalent of a bakeoff, and sources close to the talks said an announcement was likely to come on Tuesday. Front-runners for the two spots appeared to be Mary Bonauto, a prominent gay advocate who has worked for the cause for decades, and Douglas Hallward-Driemeier, a former assistant U.S. solicitor general who is now an appellate specialist in private practice.

At issue before the nine justices on April 28 will be two questions: whether the U.S. Constitution protects a right to same-sex marriage, and if it does not, whether states that ban it must recognize marriages performed in states permitting such unions. It has been difficult to fully assess the tenor of negotiations, since key leaders have declined to talk about the selection process of the two lawyers, one to argue each legal question. Skirmishes often occur in consolidated cases, when multiple parties are on a side but only one lawyer gets a spot at the lectern.

Mary Bonauto is with GLAD and would argue the constitutional issue. Per the above-linked report, Hallward-Driemeier has already been chosen and will argue the recognition issue.

UPDATE: The word is official and both of the above have been selected.

Lawyers for Michigan nurses April DeBoer and Jayne Rowse, who seek to marry in their home state of Michigan, today announced Mary L. Bonauto will represent the team making the case’s oral arguments before the U.S. Supreme Court on April 28. Bonauto will present arguments for question 1, “Does the Fourteenth Amendment require a State to license a marriage between two people of the same sex?”

“I’m humbled to be standing up for the petitioners from Kentucky and Michigan who seek the freedom to marry, along with the Michigan team of Carole Stanyar, Dana Nessel, Ken Mogill, and Robert Sedler, and with support from the other legal teams,” said Mary L. Bonauto, Civil Rights Project Director at Gay and Lesbian Advocates and Defenders. “The road that we’ve all travelled to get here has been built by so many people who believe that marriage is a fundamental right. Same-sex couples should not be excluded from the joy, the security, and the full citizenship signified by that institution. I believe the Court will give us a fair hearing, and I look forward to the day when all LGBT Americans will be able to marry the person they love.”

“April and Jayne’s family, and tens of thousands of families like theirs in Michigan, will be represented by a dynamic litigator who has a history of fighting and winning LGBT rights cases in states and districts across the country,” said Nessel. “We are very pleased that an attorney representing the DeBoer-Rowse family will be addressing the issue of marriage equality for what we hope will be the last time in our nation’s history.”

Douglas Hallward-Driemeier will present oral arguments on behalf of plaintiffs in Ohio and Tennessee for question 2, “Does the Fourteenth Amendment require a state to recognize a marriage between two people of the same sex when their marriage was lawfully licensed and performed out-of-state?”

Previous Maggie Gallagher Begs GOP Presidential Candidates To Speak Out On Indiana
Next BRITAIN: Killers Of Gay Men Marry Each Other In Federal Prison Ceremony