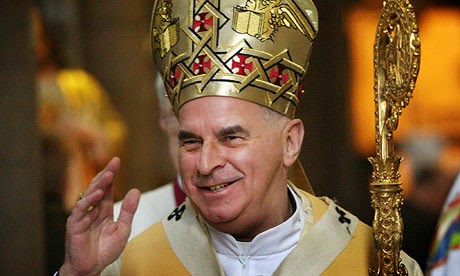 Vatican Accepts Resignation Of Cardinal Who Confessed To Sex With Priests

Scottish Cardinal Keith O’Brien, who was accused of sexually harassing several men in a scandal that exploded on the eve of the 2013 conclave that elected Pope Francis, has renounced the “rights and privileges” of his office but gets to keep his prestigious title, the Vatican announced Friday (March 20). O’Brien did not take part in the March 2013 conclave and now he will be barred from any future conclaves; at age 77, he would have lost his voting eligibility at age 80. Francis had been under pressure to take some action against O’Brien since one of his victims revealed that an internal church report on O’Brien had been sent to Rome and was “hot enough to burn the varnish” off the pope’s desk. At least five men – three priests, a former priest and a former seminarian – accused O’Brien of either sexually harassing them or pressuring them into sex, in allegations that went back to the 1980s. O’Brien was accused of being sexually active up through at least 2009.

Following the initial accusations, Bill Donohue declared that O’Brien was the target of false charges from the “lavender mafia.” And then O’Brien confessed: “In recent days certain allegations which have been made against me have become public. Initially, their anonymous and non-specific nature led me to contest them. However, I wish to take this opportunity to admit that there have been times that my sexual conduct has fallen below the standards expected of me as a priest, archbishop and cardinal. To those I have offended, I apologise and ask forgiveness.”

Two weeks after that murky confession, the Scotland Herald revealed that O’Brien’s chief accuser had been his long-term boyfriend. In August 2013 it was revealed that O’Brien had thwarted investigations into sexual abuses committed by priests under his command. And yet he gets to keep his red hat. Take that shocked look off your face.