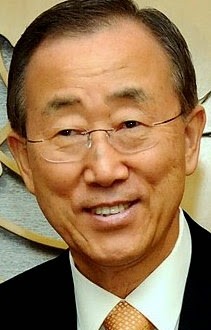 Last June, U.N. Secretary-General Ban Ki-moon issued a far-reaching administrative ruling that offered marital benefits for the first time to all of the United Nations’ lesbian and gay employees, as well as to other U.N. workers who had entered legally recognized domestic partnerships. On Monday, March 2, Russia gave the plan a resounding nyet.

Speaking Monday morning at a meeting of the U.N.’s main budget committee, a Russian diplomat demanded that Ban reverse his decision on the matter, saying the U.N. chief’s action violated a U.N. General Assembly resolution that left it to U.N. employees’ governments to determine whether are eligible for spousal benefits. Moscow has been weighing whether to force a vote in the budget committee, known as the Fifth Committee, to halt funding such benefits, a vote that it likely could win. Unlike the U.N. Security Council, the United States and other big powers don’t have the power to veto votes in the Fifth Committee. While its decisions are generally made by consensus, states can call for a vote.

“We will insist that the secretary-general urgently revoke the administrative bulletin” expanding benefits to same-sex couples, the Russian diplomat told the committee. Russia’s critics characterized the gambit as a cynical political maneuver aimed at checking the authority of a U.N. leader who has clashed with Moscow over its policies from Syria to Ukraine. Russia has transformed what is by all accounts a low-priority administrative dispute into a high-profile power struggle with the U.N. leader.

Russia’s move is being opposed by the United States and the European Union. (Tipped by JMG reader Zhera)

Previous Email Flap For Hillary Clinton
Next Bill Donohue Has Written A Book: Why Catholics Are Happy & Atheists Aren’t