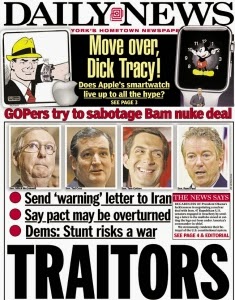 The New York Daily News on Tuesday used its front page to condemn Republican senators for signing an open letter to Iran warning that a potential nuclear deal could be null once President Barack Obama is out of office. The tabloid’s front page prominently featured Senate Majority Leader Mitch McConnell (R-KY) and Sens. Ted Cruz (R-TX), Tom Cotton (R-AR) and Rand Paul (R-KY). It also branded the 47 senators who signed the letter as “traitors” who tried to “sabotage” the President’s nuclear negotiations.

Twitchy is very upset about this.

UPDATE: JMG reader Chris sends us an interesting post from The Week:

The next time Republicans in the Senate try to explain treaties and the U.S. Constitution to Iranian officials, they may want to pick someone other than a foreign minister with a masters and PhD in international relations from the University of Denver, plus two degrees from San Francisco State University. Javad Zarif, who is also Iran’s chief nuclear negotiator, responded to a letter from Sen. Tom Cotton (R-Ark.) and 46 other GOP senators with an explainer of his own. Not only are the senators shaky on their own Constitution’s separation of powers, Zarif wrote, according to Iran’s Tasnim News Agency, but “the authors may not fully understand that in international law, governments represent the entirety of their respective states, are responsible for the conduct of foreign affairs, are required to fulfill the obligations they undertake with other states, and may not invoke their internal law as justification for failure to perform their international obligations.” That’s important, Zarif added, because “the conduct of inter-state relations is governed by international law, and not by U.S. domestic law.”