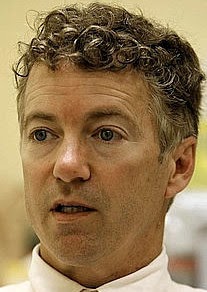 “Don’t always look to Washington to solve anything. In fact, the moral crisis we have in our country, there is a role for us trying to figure out things like marriage, there’s also a moral crisis that allows people to think that there would be some sort of other marriage. We need a revival in the country. We need another Great Awakening with tent revivals of thousands of people saying reform or see what’s going to happen if we don’t reform.” – Sen. Rand Paul, speaking today at a prayer breakfast attended by evangelical pastors. After his speech, Sen. Paul competed in the 17th Annual Chuck Norris Hideous Toupee Open, where he placed third behind John Travolta and the late Howard Cosell.