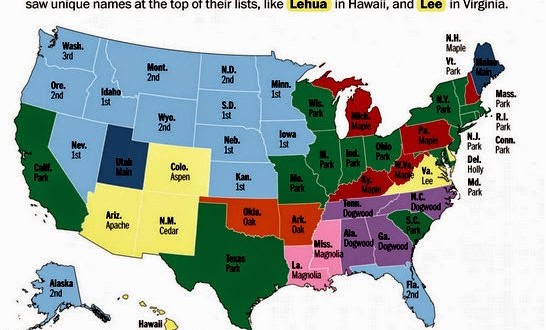 For decades we have believed that the most popular name for a road was “2nd.” But by my analysis, that crown actually goes to “Park.” (Again, look to the methodology section for a discussion of this.) Out of over a million roads in the United States, 9,640 are named “Park.” Only 8,232 are named “2nd,” or “Second.” Still, both the Census and I agree that “2nd” is a more popular road name than “1st.” The most convincing explanation anyone has come up with so far is that in many towns the primary thoroughfare is “Main” street instead of “1st” street. Because those two names split the honor, so to speak, they tumble in the rankings. Trees, numbers, and presidents are the most popular names for streets, which is understandable.