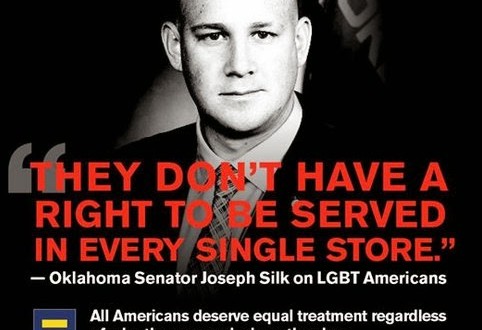 A bill that I recently introduced (SB 440) would protect businesses and religious entities who run their organizations according to their religious beliefs from being forced to violate their religious convictions in their businesses. This has outraged the LGBT community and they are crying discrimination while making themselves the only “target”, in reality it has nothing to do with them. The intent of the bill is to protect private property rights and religious liberty. As a legislator, I will always fight to protect people’s liberty to live their lives according to their beliefs and convictions. People have a right to be homosexual and I will always protect that. However that right does not give them an excuse to trample another person’s right to live out their religious beliefs in their place of business.

Today he is playing the martyr for Bryan Fischer.