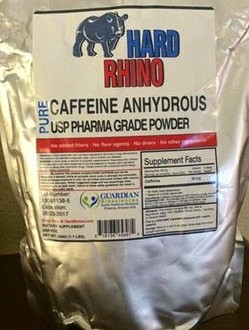 The parents of an Ohio high-school student who overdosed on caffeine powder last May have filed a lawsuit against Amazon and the powder’s manufacturer, claiming they failed to provide suitable warnings. Doctors caution that people can overdose with ease. Dennis and Katie Stiner of LaGrange, Ohio claim the online retailer sold the Hard Rhino caffeine powder to a classmate of their son. Logan Stiner, 18, was found dead inside the family home last May, after consuming the powder. Medical examination declared the cause of death to be “cardiac arrhythmia and seizure caused by acute caffeine toxicity.” Amazon has declined to comment on the lawsuit, but the company did stop selling Hard Rhino after another man died in Georgia last summer. “Parents should be aware that these products may be attractive to young people,” the Food and Drug Agency said in an advisory issued, in December 2014, urging consumers to “avoid powdered pure caffeine” as it is “nearly impossible to accurately measure” a proper dosage at home.

The Hard Rhino powder has 4700mg of caffeine per teaspoon. An average cup of coffee contains about 320mg.