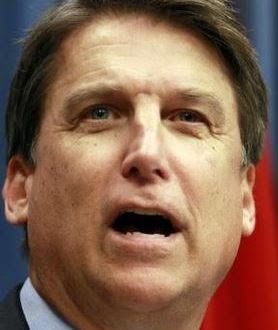 Via the Charlotte Observer:

Republican Gov. Pat McCrory on Monday called a GOP proposal to redistribute sales tax revenues “class warfare” that would raise taxes on “millions of people in North Carolina.” And the governor said another Republican bill designed to protect religious freedom “makes no sense.” “What is the problem they’re trying to solve?” McCrory said during a radio interview. “I haven’t seen it at this point in time.” McCrory’s comments on WFAE’s Mike Collins Show again put him at odds with General Assembly Republicans. McCrory compared the “Religious Freedom Restoration Act,” whose sponsors include two Charlotte lawmakers, to the effort to allow transgendered persons to use the bathroom of their choice. Both are not needed, he said. McCrory also said he opposes a Senate-passed bill to give magistrates the right not to perform same-sex marriages if they say that violates their religious beliefs. “I don’t think you should have an exemption when you took an oath to uphold the constitution of North Carolina,” he said.

McCrory doesn’t want to be another Mike Pence.

Chris Sgro, exec. dir. of Equality NC, responded to the governor’s comments by calling on North Carolinians to hold their electeds accountable and encourage more state leaders to vote against any and all legislation that would codify discrimination.

“It is heartening to see that our state’s leaders are finally listening to the deafening calls from LGBT advocates, business leaders, faith communities, and North Carolina constituents, from Murphy to Manteo, all in opposition to this type of dangerous and discriminatory legislation.” Sgro added, “These religious refusal bills are in no way similar to Charlotte’s or any other state or local non-discrimination ordinance. Rather, RFRA essentially allows individuals to use their religious beliefs to harm others, paving the way for challenges to virtually any law designed to protect all of us from various forms of discrimination, in Charlotte and beyond.Therefore, Equality NC and our allies will do everything we can to make sure they never become law, from the committee rooms of our state legislature all the way to the governor’s desk at the state capitol.”

Equality NC is asking all North Carolinians to encourage their legislators to vote against this latest discriminatory RFRA legislation, as well as contact the governor to encourage him to stand by his comments, and veto any RFRA legislation that passes his desk. “Right now, we must not only protect the LGBT community but also North Carolina’s reputation as a place welcoming to all,” said Sgro.