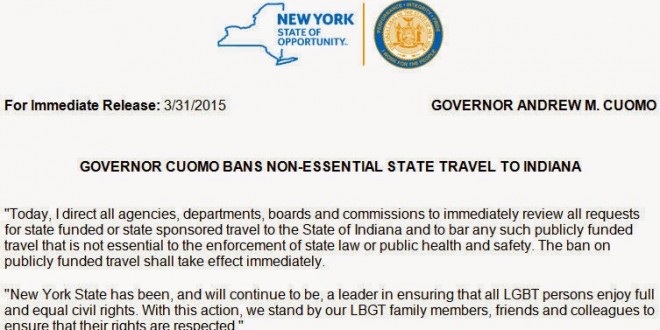 The five gay lawmakers in the state Legislature wrote a letter to Gov. Andrew Cuomo today urging him to boycott Indiana’s “Religious Freedom Restoration Act” and ban state travel to the state. The lawmakers—Sen. Brad Hoylman and Assemblymembers Deborah Glick, Daniel O’Donnell, Harry Bronson and Matthew Titone—joined the growing chorus of criticism over the law, saying Cuomo needs to sign an executive order to bar state-funded travel to Indiana because they said the law is discriminatory toward gays and same-sex couples. The bill makes “clear that Indiana businesses are permitted by law to discriminate on the basis of sexual orientation or gender identity or expression in matters including housing, employment, and access to public accommodations,” the letter said.

Hit the link to read their letter.

Previous Todd Starnes Turns On Mike Pence
Next Glenn Beck: The Furor Over Indiana’s RFRA Will Lead To Concentration Camps