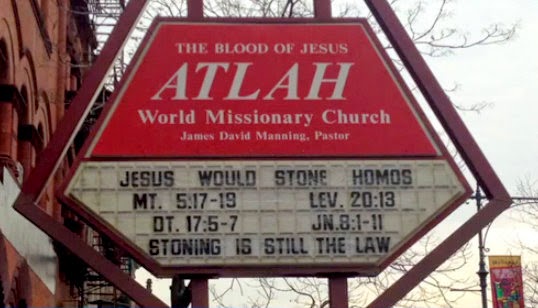 A city-issued violation could force the controversial Atlah Worldwide Church to take down its controversial sign — which often displays homophobic and racist messages — after multiple failed attempts by critics who tried to pressure the church to put a stop to what they called hate speech. The church on 123rd Street and Lenox Avenue — which is a landmarked building — was hit with five violations Thursday for altering the structure without permits, according to the Landmarks Preservation Commission. Atlah’s infamous sign, which Pastor James David Manning uses to broadcast messages like “Jesus would stone homos,” and “Obama has released the homo demons on the black man,” was installed without the commission’s authorization, spokeswoman Damaris Olivo said. The violations were issued because the sign was erected without approval, not because of the content of the messages it displayed, Olivo said.

Pastor James David “Semen Lattes” Manning has been ordered to appeared for a hearing before the Landmarks Commission on May 4th. Besides the sign, violations were issued for the unpermitted changes of installing a fence on Lenox Avenue and removing a balcony in the church.

Previous Sen. Lindsey Graham: As President I’d Use The Military To Force Congress To Reverse Cuts To Defense Spending
Next Ferguson Police Chief To Resign