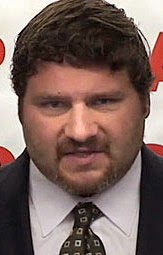 Matt Barber: Gay Marriage Ruling Will Be Sledgehammer To Destroy The Church

“If, God forbid, the Supreme Court somehow defines and manufactures a constitutional so-called right to sodomy-based marriage this summer, in June, if they do that then the floodgates will be open. There will be Christian persecution widespread across the United States and the so-called gay marriage agenda will be the sledgehammer used to crush the church and to crush religious liberty and the crush individual Christians, their finances, to ruin them. That’s what this agenda was always about and that’s what we will see if the Supreme Court goes the wrong way in June.” – Matt Barber, speaking on the Liberty Counsel’s radio program. In recent months Barber has twice published columns from advocates of executing all LGBT Americans.