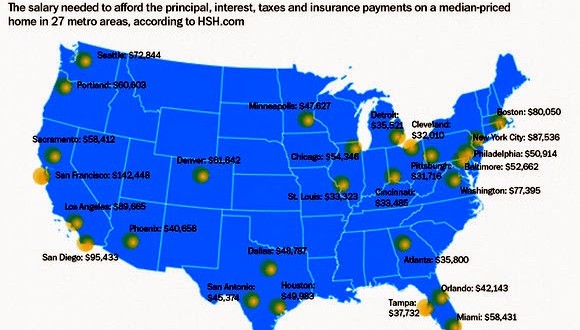 Here’s definitive proof that San Francisco’s real estate market is insane. HSH.com, a mortgage research site, has estimated how much salary you need to earn to afford the principal, interest, taxes and insurance payments on a median-priced home in 27 metro areas. On a national scale, a buyer who puts 20 percent down would need to earn a salary of $48,604 to afford the median-priced home in America. But that total varies a lot from city to city. Pittsburgh, Cleveland, St. Louis and Cincinnati rank as the most affordable metros in which to buy a new home – HSH.com estimates that you can buy the median home while making less than $34,000 – while New York, Los Angeles and San Diego are at the high end, requiring salaries of nearly $90,000 or more. But the most expensive city by far is San Francisco, where the site estimates you would need to make $142,448 to buy the median home in the area.

Previous Matt Baume: Marriage New Watch
Next What Happens When The Queen Dies?