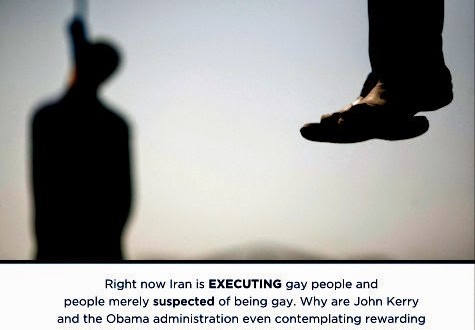 The Log Cabin Republicans today published the above message in a full-page ad in Roll Call. Via press release:

“It is absolutely appalling that the negotiations taking place right now between the United States and the Iranian government have avoided any serious discussion of the horrendous human rights abuses taking place in Iran,” Log Cabin Republicans National Executive Gregory T. Angelo stated. “Given the reluctance of Democratic gay rights activists to ever level any criticism whatsoever against the Obama administration, and the absence of the brutal treatment of gays as well as women and Jews from United States diplomacy in this matter, it was incumbent upon Log Cabin Republicans to draw attention to this important issue. The deadline for a deal is looming, but it is not too late; Secretary Kerry can still make human rights an important part of these highly consequential negotiations. Anything that does not is a bad deal.”