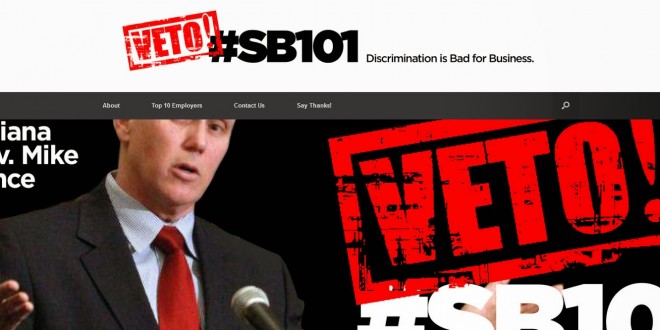 “As a seminary graduate, this bill is deeply offensive,” said Heather Cronk, co-director of GetEQUAL. “The fact that religion is being used as a smokescreen for deeply hateful and vile sentiments by right-wing extremists, and then cemented into law, is not just un-Christian – it’s un-American.”

As activist Scott Wooledge puts it: “I’ve engaged in the battles against these bill in Arkansas, Arizona, and Tennessee in 2011. My message to those pushing these regressive, reactionary “religious freedom” laws is we will follow you to whatever state you try this and we will fight you aggressively. And my message to our allies and friends is we will pressure to defend your LGBT friends’ and workers’ right to live their lives free of discrimination.”

Scott McCorkle, CEO of the Salesforce Marketing Cloud of Indianapolis, has also said SB 101 threatens future growth in Indiana. “Our success is fundamentally based on our ability to attract and retain the best and most diverse pool of highly skilled employees…” The Indiana Chamber of Commerce, engine maker Cummins, health-care provider Eskenazi Health and pharmaceutical company Eli Lilly and Co. have also voiced concerns about SB 101’s impact on their businesses.

Governor Pence now has seven days to act on the bill. While time remains, the Veto SB 101 campaign will directly engage the Indiana business communities and leaders to take a clear position on this legislation. Direct inquiries have been made to Indiana’s ten largest employers by state size. The Veto SB 101 campaign will provide updates on the site as information becomes available.

This kind of pressure on local corporations worked in Arizona. See the veto website.

Previous Viral Video Of The Day
Next Shamir – Call It Off