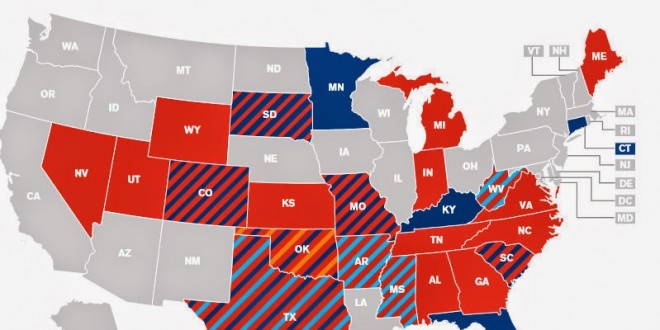 As the above HRC map shows, anti-LGBT legislation continues to sweep the nation in advance of the coming ruling by SCOTUS. It appears that Indiana’s license to discriminate bill will be the next to go on the books. Dominic Holden reports at Buzzfeed:

Of the 13 religious freedom bills introduced in state legislatures around the United States this year — which critics say would legalize discrimination against LGBT people — one leads the pack in Indiana, where a measure appears on the verge of passage with backing from the general assembly and governor. “I would predict the bill passes on Monday,” Indiana House Speaker Brian Bosma told BuzzFeed News in a phone interview Thursday.

Described by one of his critics as “the most powerful person in Indiana when the legislature is in session,” Bosma had just wrapped up a House vote in which his Republican majority shot down six amendments to soften the bill, all from Democrats, in 60-to-30 votes. “I think the votes on the amendments were a strong sign of how the bill will fare in final passage,” said Bosma. Bosma has tentatively scheduled a final vote for Monday, March 23.

Rather than solely banning government from burdening a person’s religious freedom, the Indiana bill allows a legal defense in interactions “regardless of whether the state or any other government entity is party to the proceeding.” The religious liberty defense would be available under all state laws and local ordinances, unless state law provides a specific exemption from it.

Religious freedom restoration. Prohibits a governmental entity from substantially burdening a person’s exercise of religion, even if the burden results from a rule of general applicability, unless the governmental entity can demonstrate that the burden: (1) is in furtherance of a compelling governmental interest; and (2) is the least restrictive means of furthering the compelling governmental interest. Provides a procedure for remedying a violation. Specifies that the religious freedom law applies to the implementation or application of a law regardless of whether the state or any other governmental entity or official is a party to a proceeding implementing or applying the law. Prohibits an applicant, employee, or former employee from pursuing certain causes of action against a private employer.

Previous GOP Parodies Beer Ad In Today’s Episode Of Their #HillaryScare Campaign
Next STUDY: Gay Men Tan More And Have Double The Incidence Of Skin Cancer