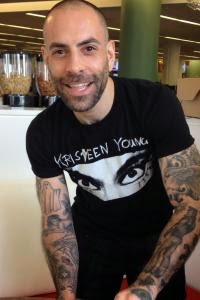 “From Grindr profiles that demand ‘masc only’ to men like [Russell] Tovey who think their masculinity — however manufactured, however antithetical to who they truly were when they landed on this planet — is what makes them marketable or desirable, our obsession with what it means to be a man and what it means to fall short of that is keeping us from becoming truly liberated.

“If it weren’t for my father, I wouldn’t be who I am today. I could have been forced to play football in hopes that it would somehow unleash the man dozing inside of me. I could have been sent to therapy in hopes that I could be reprogrammed, repaired, made whole. I could have ended up with a belt around my neck and swinging from the light fixture in our formal dining room. But I wasn’t. But I didn’t. I am one of the lucky ones.

“My father died eight years ago. He never got to see the man that I’ve become and we never specifically talked about everything he did for me — what he made me — simply by loving me. Without a son of my own, it’s a gift that I can only attempt to pay forward to the thousands of boys and men who come after me — who brush past me in crowded subway cars or surround me on Facebook or might be reading this now — by speaking up and saying I am a faggot and it didn’t happen by mistake. And if you’re a faggot too, I hope you know you don’t need to toughen up. You never have to stop prancing. You are not a mistake.” – Noah Michelson, writing for the Huffington Post.