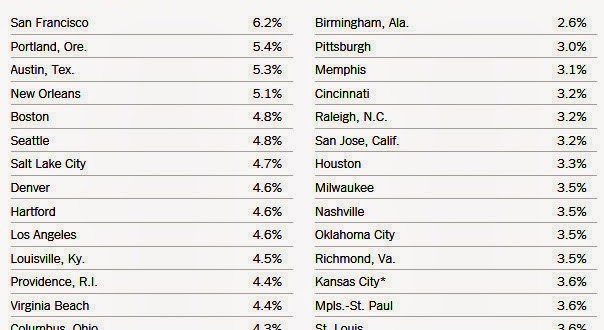 The San Francisco metropolitan area has the highest percentage of the adult population who identify as LGBT of any of the top 50 U.S. metropolitan areas, followed by Portland, Oregon, and Austin, Texas. Variation in the percentage who identify as LGBT across the largest metro areas is relatively narrow, with San Francisco’s percentage just 2.6 percentage points higher than the national average of 3.6%, and the lowest-ranked metro area — Birmingham, Alabama — one point below the national average.

The top 10 includes metro areas from every region of the country except the Midwest. Given the long history of a visible and politically active LGBT community in San Francisco, the city’s ranking at the top of this list is not surprising. Similar to San Francisco, Metropolitan Statistical Areas (MSAs) like Portland, Seattle and Los Angeles in the West, and Boston in the Northeast, are known for their progressive social and political climates and active LGBT communities. Hartford is the capital of Connecticut, which has permitted same-sex couples to legally marry longer than every state except Massachusetts.

MSAs like Austin and New Orleans in the South, and Denver in the Rocky Mountain region, all have reputations as socially progressive cities within states and regions that are much more conservative, perhaps making them regional hubs for the LGBT population.