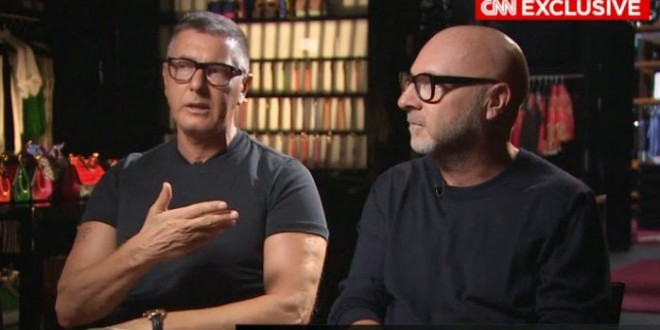 Embattled billionaire designers Dolce and Gabbana took to CNN this morning for some damage control.

In an exclusive interview on Wednesday, Dolce said his views on IVF were private, personal beliefs based on his sense of a traditional Sicilian family. “I believe in the traditional family,” he said. “It is impossible to change my culture for something different. It’s me… I respect all the world, all the culture.” Dolce said he did not judge people who chose the procedure, although he previously made controversial statements to the Italian magazine, Panorama, referring to IVF babies as “chemistry children and synthetic children.”

The initial comments from Dolce and Gabbana struck some as hypocritical coming from a gay couple that was romantically involved until 2005 (they continued working together after the breakup). Dolce’s comment was seen as an attack on gay and lesbian families.

But Gabbana said they weren’t telling anyone how to live their lives. “We love gay couple. We are gay. We love gay couple. We love gay adoption. We love everything. It’s just an express of my private point of view,” he said. Dolce told CNN he was not boycotting the artist: “I love the music of Elton John.” He said he believed they could end the dispute: “Every people resolve everything by talk… we start to talk, the problem is resolved.” The pair said they respected how people chose to live their lives, including the use of IVF, and said others should also respect differences in opinion.

Hit the link for the video.

Previous TRAILER: Pixels
Next Brian Brown: Fill In The Blank