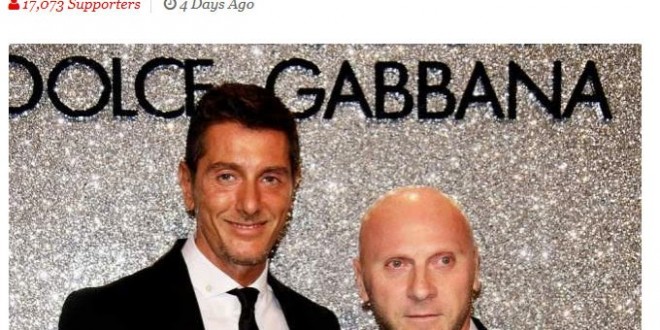 A host of performers, led by Elton John, have called for a boycott of the Italian designers for “lining up with the Pope and the far-Right in their support for legal discrimination.” Elton John and David Furnish, his “husband,” have two IVF children from a surrogate mother in the United States.

Unfortunately this is just the latest example of the increasingly common attacks against entrepreneurs who have dared to speak the “politically incorrect” truth that family and marriage are built upon the union of a man and a woman.

Though we may not necessarily agree with everything they believe or stand for, right now Dolce and Gabbana need encouragement from those who support traditional marriage and the natural family not to cave under the intense pressure that is being put on them by intolerant gay activists. We need people from every sphere of life to speak the truth about marriage and the family, and those who do should be given the support they need to withstand the inevitable attacks that will result.

Ben Shapiro is promoting the petition at TruthRevolt.