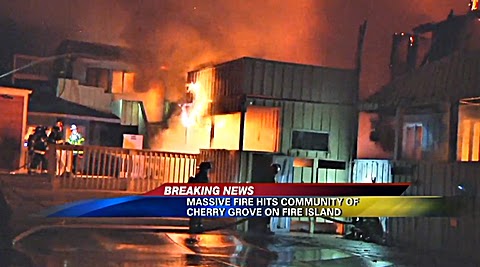 A massive fire swept through Cherry Grove’s commercial district on Fire Island last night, destroying several private homes, the Holly House Hotel, and the Grove Hotel, the last of which was home to the famed Ice Palace nightclub. For decades the Ice Palace hosted the Miss Fire Island pageant and served as the kickoff location for the annual Fire Island Pines Drag Invasion. Local authorities say that the source of the blaze, which reportedly broke out on the nearby boardwalk, is unknown. About 80 firefighters were on the scene and two suffered injuries, but no residents were hurt, possibly because most of Fire Island is unoccupied at this time of year. Last night’s fire was yet another in a recent string of disasters to strike Fire Island’s two predominantly gay towns. The commercial district of neighboring Fire Island Pines was destroyed in a 2011 fire and both towns were flooded during 2012’s Hurricane Sandy.

UPDATE: Contrary to the above-linked Newsday report that the Grove Hotel is a “complete loss,” this news item says the Ice Palace nightclub portion of the complex suffered only minor damage.