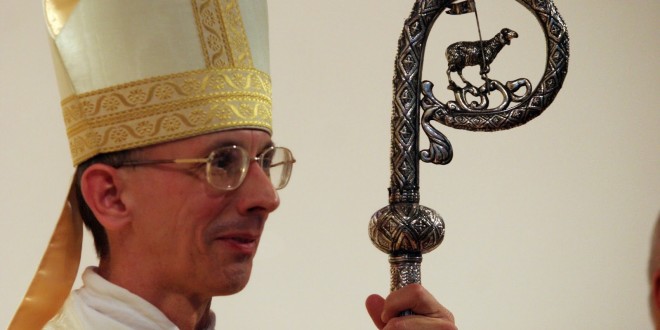 Via the Catholic News Herald:

The proposal has generated controversy and opposition from various religious groups, which have expressed concern that its wording and its intent are to deny churches and businesses the ability to uphold their religious beliefs about sexuality, marriage and more. “I pray that the city council will provide all of the people of Charlotte with an ordinance that respects our constitutional right to the free exercise of religion,” Bishop Peter J. Jugis said in a brief statement issued Feb. 26. He added, “God made men and women different; as a society we should respect that difference.”

The Catholic Church teaches that all people are made in the image of God and therefore deserving of dignity and respect. The Church’s teaching that marriage can be between only one man and one woman, and its condemnation of sexual relations outside of marriage, have put it at odds with laws that are increasingly creating “rights” for the redefinition of marriage and artificial manipulation of gender while disregarding or penalizing individuals whose religious beliefs clash with the newly created “rights.” “There are no federal laws that expressly prohibit discrimination based on sexual orientation, gender expression, or gender identity,” Charlotte City Attorney Robert E. Hagemann noted in a Feb. 3 memo to the city council.

Anti-gay activists led by the Benham brothers will stage a hate rally today outside of the chamber of the Charlotte City Council. Similar LGBT rights ordinances already exist in multiple North Carolina municipalities, including the cities of Raleigh, Greensboro, Chapel Hill, and Asheville.