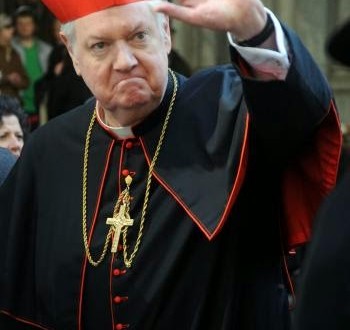 Cardinal Edward Egan, a longtime foe of LGBT rights and the former Archbishop of New York, has died at the age of 82.

Egan was pronounced dead at NYU Langone Medical Center at 2:20 p.m. after going into cardiac arrest, Archdiocese officials say. Joseph Zwilling, spokesman for the Archdiocese, told NBC 4 New York Egan seemed fine when he was eating lunch earlier Thursday and showed no signs of illness. He died a short time later. Zwilling said the Archdiocese was in shock. Egan was born on April 2, 1932, in Oak Park, Illinois. He was ordained a priest for the Archdiocese of Chicago on Dec. 15, 1957. Egan was consecrated a bishop in 1985. For the next three years, he served as Auxiliary Bishop and Vicar for Education of the Archdiocese of New York. In 1988, he was appointed the Bishop of the Diocese of Bridgeport by Pope John Paul II. He was appointed Archbishop of New York in 2000 and made a cardinal in 2001.

Egan is perhaps best remembered for his 2012 retraction of the apology he made in 2002 for sexual abuses that took place under his watch while he was the Bishop of Bridgeport. The New York Times reported on the retraction:

In a interview with Connecticut Magazine published on the magazine’s web site last week, a surprisingly frank Cardinal Egan said of the apology, “I never should have said that,” and added, “I don’t think we did anything wrong.” He said many more things in the interview, some of them seemingly at odds with the facts. He repeatedly denied that any sex abuse had occurred on his watch in Bridgeport. He said that even now, the church in Connecticut had no obligation to report sexual abuse accusations to the authorities. (A law on the books since the 1970s says otherwise.) And he described the Bridgeport diocese’s handling of sex-abuse cases as “incredibly good.” All of which has Cardinal Egan, now 79 and living in Manhattan, drawing fire from advocates who say he has reopened old wounds.

The Diocese of Bridgeport ended up paying an estimated $15M to the sexual abuse victims.