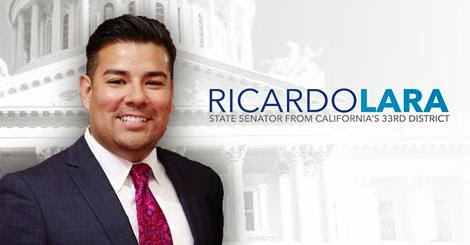 Openly gay California Sen. Ricardo Lara is pressuring the state Bar Association to disbar Matt McLaughlin, the Christian attorney who last month filed a 2016 ballot measure that would ask voters to approve the death penalty for homosexuality. Via the Bay Area Reporter:

Lara said that McLaughlin’s measure isn’t just offensive, but an actual violation of the California bar’s code of conduct for attorneys. “Qualification to become a licensed attorney not only includes educational requirements and an examination, but also requires demonstrated ‘good moral character,'” Lara said. “The state bar’s admissions rules on good moral character include that those seeking admission to the bar demonstrate respect and obedience for the law, and respect for the rights of others and the judicial process.” Rule 2-400 of the California Bar Association Code prohibits licensed practitioners from discriminating on the basis of sexual orientation when rendering legal services, Lara pointed out. The senator also said that he would look into passing legislation barring discriminatory or hate speech-oriented measures from being allowed on future state ballots.

A spokesman for the California Bar Association has acknowledged the controversy, but declined to speak about the case because their investigation process is “confidential by law.” McLaughlin’s proposed ballot measure vanished from the Attorney General’s website some time this week, but it’s not known yet known if the measure is still considered active.

UPDATE: The ballot measure is back on the AG’s website.

RELATED:  Some wingnuts are predictably claiming that McLaughlin’s ballot measure is a “false flag” attempt by homofascists to discredit Christians. Snopes has even had to weigh in and declare that the Sodomite Suppression Act is a real thing.