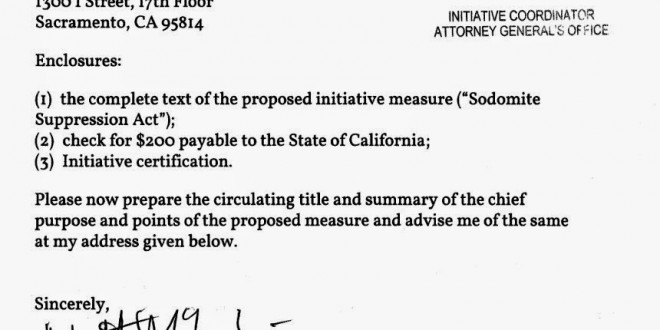 A Christian activist named Matt McLaughlin has filed a proposed ballot measure with the California Attorney General’s office which would ask voters to approve the death penalty for homosexuality.  Wonkette has tried to identify McLaughlin:

The ballot initiative filing with the AG’s office offers little in the way of clues to McLaughlin’s identity, but there is an address that matches that of a lawyer by that name and address on avvo.com. When we looked the address up, it turned out to be a Mail Box Express store in Huntington Beach. Huh. That is definitely not a law office! In approximately four minutes of thorough searching, we also couldn’t come up with any legal cases involving a Matthew G. McLaughlin, and then we suddenly had to go read all of the think pieces about what color that dress was (#TeamGoldAndWhite), so we got distracted.

We DID get a hit on a Matt McLaughlin, lawyer, same Mail Box Express address, BOOM, who in 2004 submitted a citizen ballot initiative to give bibles to all public school kids in California, grades 1-12, because “great literature.” That initiative was way less crazy than the “sodomite” one (although still very crazy), and, as a Literate Person and also A English Major, we see the value of learning about how the Bible has impacted Western literature. More to the point, that initiative included an opt-out provision. However. Groups like the Anti-Defamation League and Americans United for Separation of Church and State were extremely suspicious, and McLaughlin didn’t collect the required number of signatures, so it didn’t go anywhere.

In order for the gay death penalty to be put to California voters, the backers of an initiative must pay the $200 filing fee (which has been done in this case) and then collect petition signatures equal to 5% of the total votes cast in the last gubernatorial election. Per the results of the 2014 election, McLaughlin must gather about 366K names. Below is opening text of his Sodomite Suppression Act.