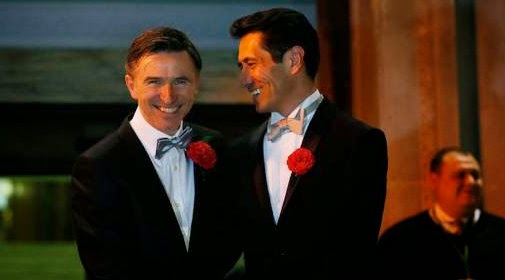 BRITAIN: It’s The First Anniversary Of Marriage Equality In England And Wales

The Marriage (Same Sex) Couples Act received Royal Assent on 17 July 2013, paving the way for couples to marry in England and Wales from March 29, 2014. Today, the first couples to marry celebrate their first wedding anniversaries, and campaigners are also marking the day. Though England, Wales and subsequently Scotland have all enacted same-sex marriage, it is still banned in Northern Ireland, as well as in Crown Dependencies of Jersey, Guernsey and the Isle of Man.

The couple seen above were among the first to marry at midnight one year ago. They used their moment in the national press to comment upon the plight of LGBT people in Nigeria, Russia, and Uganda.

Previous MONTANA: License To Discriminate Ballot Measure Tabled After Deadlocked Vote
Next Indiana, A Great Place To Be A Bigot