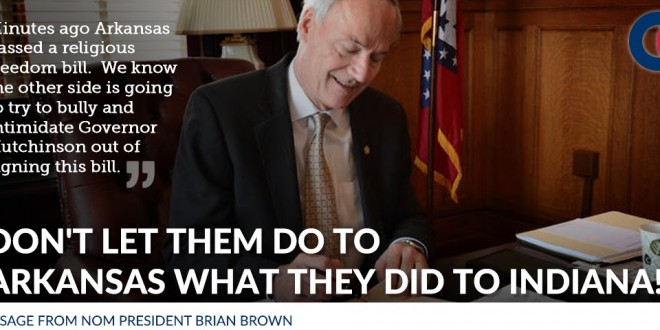 Brian Brown: Don’t Let Bullies Intimidate Arkansas Like They Did With Indiana

Dear Marriage Supporter, DON’T LET THEM DO TO ARKANSAS WHAT THEY DID TO INDIANA! Minutes ago Arkansas passed a religious freedom bill. We know the other side is going to try to bully and intimidate Governor Hutchinson out of signing this bill. The time to act is NOW! Support Governor Hutchinson and urge him to Not be Bullied and Sign the Law. Also tweet out #IStandWithArkansas and get onto Facebook and let everyone know your support! It’s urgently needed that you forward this message to your friends and family and ask them to take action as well. We must stand up against this pernicious assault against religious liberty.

So far there are exactly two tweets with the #IStandWithArkansas hashtag. Maybe we can help them out with a little hijacking.

Previous FOTF On Indiana: Liberals Have Launched A War On The Freedom Of Religion
Next ARKANSAS: Walmart Tells Governor To Veto License To Discriminate Bill