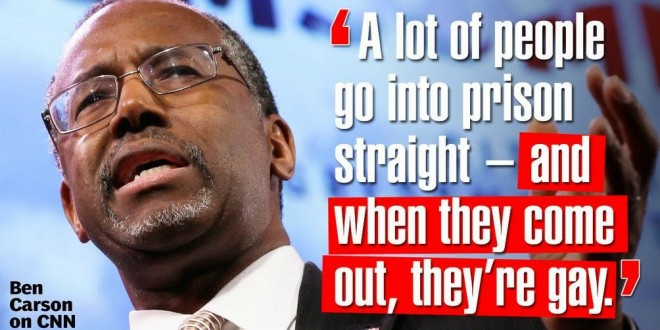 Ben Carson: People Turn Gay In Prison, Proving That Homosexuality Is A Choice

Ben Carson, the retired neurosurgeon and potential Republican presidential candidate, said Wednesday that “a lot of people who go into prison straight, and when they come out they’re gay.” The remarks were made on CNN’s “New Day” in response to a question from host Chris Cuomo, who asked if Carson thought being gay was a “choice.” “Absolutely,” Carson replied. Asked why, he went on to explain his prison theory. “So did something happen while they were in there?” he said. “Ask yourself that question.” Carson made waves in 2013 when he compared gay marriage to pedophilia and bestiality in an interview with Fox News’ Sean Hannity.

Previous Tweet Of The Day
Next Liberty Counsel: The Alabama Supreme Court Has Restored The Rule Of Law