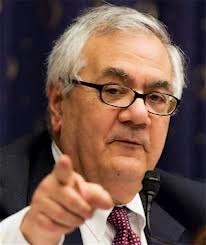 Barney Frank: If Aaron Schock Is Gay, He Has Forfeited His Right To The Closet

“I don’t know if he’s gay or not. But if he is, he’s forfeited any right to privacy because he votes anti-gay. My view is that people who are gay who vote to support the right of other people to do it have a right to privacy, but the right to privacy does not include hypocrisy. The one thing that puzzled me, The New York Times had a story about how he redecorated his office to look like Downton Abbey, but all I saw were pictures of like Ulysses S. Grant. It’s obviously sort of disjunctive in my mind. There were all these pictures of Republican presidents. I don’t know what they were doing in Downton Abbey. I suppose you could say, from a certain angle, Herbert Hoover does look a little bit like Maggie Smith depending on the light, but nobody could have been Ulysses S. Grant. I have to say, if they’re not true [the rumors], he spent entirely too much time in the gym for a straight man.” – Barney Frank, speaking to Business Insider.