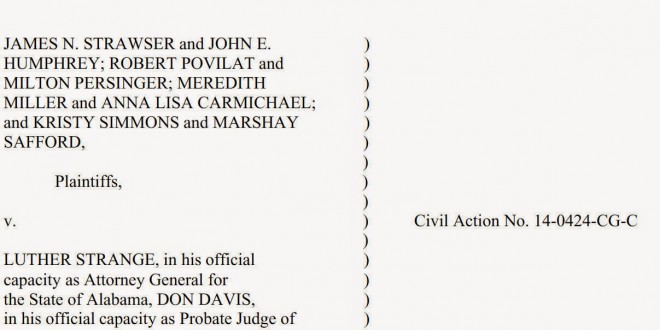 A group of leading national civil rights organizations today filed a motion requesting a federal district court to expand a lawsuit challenging Alabama’s ban on same-sex marriage and to order all county probate judges in the state to issue marriage licenses to same-sex couples. The joint motion was filed by the Americans United for Separation of Church and State, the American Civil Liberties Union of Alabama, the National Center for Lesbian Rights and the Southern Poverty Law Center.

The request, filed as part of a lawsuit brought by five same-sex couples who previously obtained an order from the same court requiring issuance of marriage licenses in Mobile County, seeks class-action status that would include all same-sex couples in Alabama who wish to marry and have their marriage recognized by the state.

The Alabama Supreme Court on Tuesday halted same-sex marriages in the state despite the U.S Supreme Court’s refusal to stay a lower court’s decision invalidating the ban. “If Alabama officials thought we were going to sit back and allow them to deny same-sex couples their constitutional right to marry, they thought wrong,” said Ayesha N. Khan, legal director of Americans United. “We are going to fight for these couples.