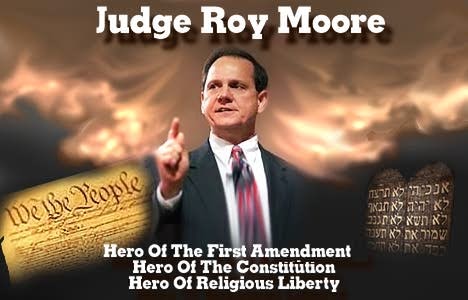 The group was moved to honor Chief Justice Moore following his defense of Alabama’s statutory and constitutional ban on same-sex marriage. Moore’s actions were based on the fact that the federal court does not have the power to redefine marriage in direct opposition to legal tradition and the clearly expressed will of the people. His courage and conviction persuaded CAAP that Chief Moore was the ideal honoree for the inaugural presentation of an award inspired by Dr. Martin Luther King Jr.’s famous letter.

“Chief Justice Moore is an example for all of us,” stated Rev. William Owens, President of CAAP. “By making a principled and persuasive stand for marriage, Chief Justice Moore has singled himself out as someone who is ready to defend our most cherished values and help lead this new civil rights movement. By his words and courageous actions, he has helped preserve marriage, the family, justice, and the spirit of democracy. This is what it means to be a ‘Letter from Birmingham Jail Courage Award’ recipient. We hope that his example inspires others to take similar action to defend marriage in their own communities.”

The group announced that they plan to present the Letter from Birmingham Jail Courage Award to Justice Moore in a special ceremony in April.

RELATED: JMG reader Keith reminds us that CAAP is a NOM front-group.

Previous Headline Of The Day
Next Cal Thomas: The End Times Schedule Calls For SCOTUS To Approve Marriage