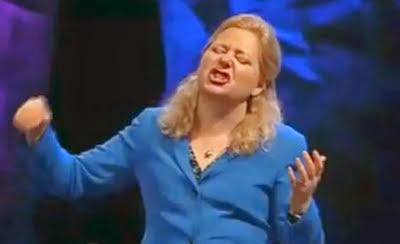 Radical Religious Right activist Janet Porter has released yet another trailer for her upcoming documentary “Light Wins: How To Overcome The Criminalization Of Christianity,” which features a who’s who of anti-gay activists as well as several Republican members of Congress and presidential hopefuls Rand Paul and Mike Huckabee. “Like a tank in Tiananmen Square,” Porter says, as she walks down the middle of a dark street as a pair of headlights bear down upon her, “the homosexual agenda has been running over people since Anita Bryant’s courageous stand in the 1970s.” After that, it is nothing but 10 minutes of anti-gay activists calling upon Christians to rise up and fight back against the “homosexual agenda.”

So many of the most infamous anti-gay villains are in this clip, your computer might just explode from all the spittle-flecked crackpottery.

Previous Jersey City: America’s Most Diverse Town
Next Correction Of The Day