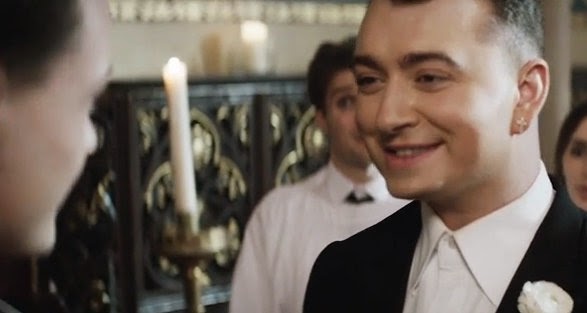 Grammy nominee and Rolling Stone cover star Sam Smith unveiled the video for his new single “Lay Me Down,” the latest track off his platinum-selling debut album In the Lonely Hour. The video, filmed at the parish church of St. Margaret, Lee outside London and directed by Ryan Hope, finds Smith performing his ballad in front of what appears to be a mournful funeral but turns out to be a joyous gay marriage, a controversial situation given the United Kingdom’s (and The Church’s) stand on same-sex marriages. Rolling Stone was on set with Smith as the singer talked about the message behind the video. “Obviously gay marriage isn’t legal in churches, and we’re doing a gay marriage today, in the church. We’re the first ever to do it. It’s obviously not a real marriage, but still,” Smith tells Rolling Stone from the set. “The priest just said to us, ‘We’re going against the rules by doing this today,’ which I thought was a lovely element in the video.

This song holds a very dear place in my heart. With this video myself and Ryan Hope the director have decided to make a statement and showcase something we passionately believe in. This video shows my dreams that one day gay men and women and transgendered men and women all over the world, like all our straight families and friends, will be able to get married under any roof, in any city, in any town, in any village, in any country. I hope you enjoy it. I love you all, x﻿.

Lovely track, gorgeous clip. I think Rolling Stone might be wrong, it seems like the wedding part is a flashback to before the funeral. UPDATE: The Hollywood Reporter is wondering too.